It’s been just over a week since since we came home from China, and we are settling into our new normal with this sweet little guy. I thought I’d share a little bit more about him with you. 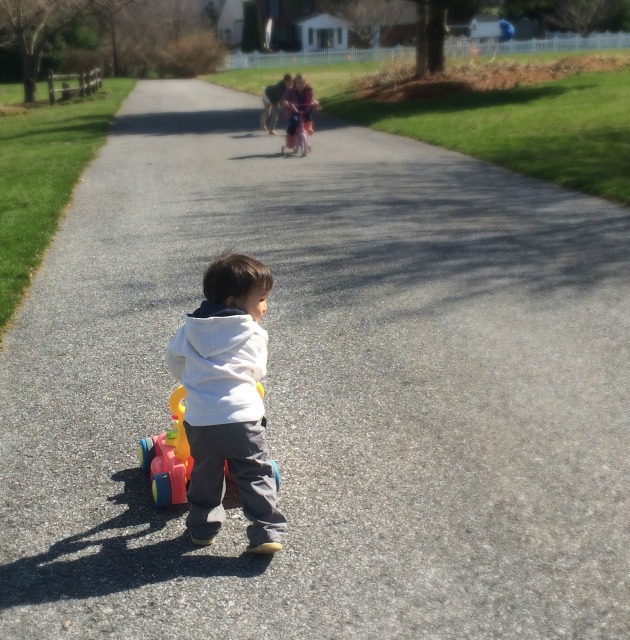 Since we first met him, he has surprised us with his ability to communicate, even though he doesn’t understand English and we don’t understand Chinese. We have never had a moment where he’s been frustrated with us not understanding him. He uses hand motions and grunts when he wants or needs something. For example, he points to his mouth or his belly when he’s hungry and moves his hands in a certain motion meaning “no”. We’ve also taught him a few signs like “more” and “all done”, which he’s learned very quickly.

Because of his cleft palate, he has trouble forming words, so he doesn’t say much except “no”. I mean, he’s two, so it’s normal that it is his favorite word, right? 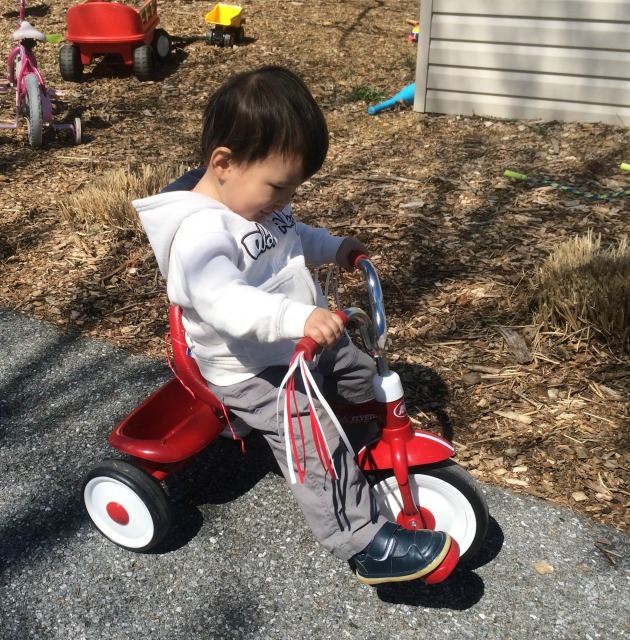 His very favorite thing to do is play outside, and we’ve been taking lots of walks and doing a lot of swinging. I am so thankful it is Spring and the weather has been great for being outside! Our days would be a lot harder if we were stuck inside all day.

He also likes to play with legos and toy farm animals and little cars and trucks. He seems to figure things out very quickly and likes to organize and stack his toys. 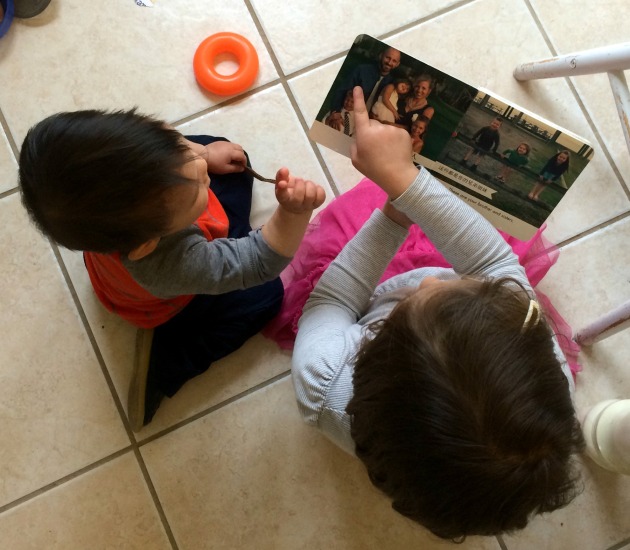 Like a lot of kids coming from orphanages, food is very important to him and he is obsessed with it. He is almost constantly telling us he is hungry, and we are careful to meet his needs for comfort and security in food. I try to have healthy snacks on hand for him. He most likely wasn’t fed as much as he needed at the orphanage and now that he is able to have as much as he wants, he probably has fears that it will be taken away, so he finds a lot of security in knowing food is always available to him.

Because he has a cleft palate, we really didn’t know what he was able to eat. We’ve been really surprised to find out that he can eat absolutely anything, including things that are more difficult to take bites out of like apples. So far he eats whatever we eat and has never turned anything down. It’s been such a blessing and has made our lives much easier.

He probably was never taught how to use a spoon to eat, and he has loved learning that. He is incredibly messy when he eats, though, and I can’t wait until it’s warm enough to eat outdoors so that my floors stay somewhat clean!

It might not look like it in the photos, but he is a little guy. Even though he is two, he wears 18 months clothes and many of them are too big for him. But I suspect he will gain a lot of weight in the next few months. 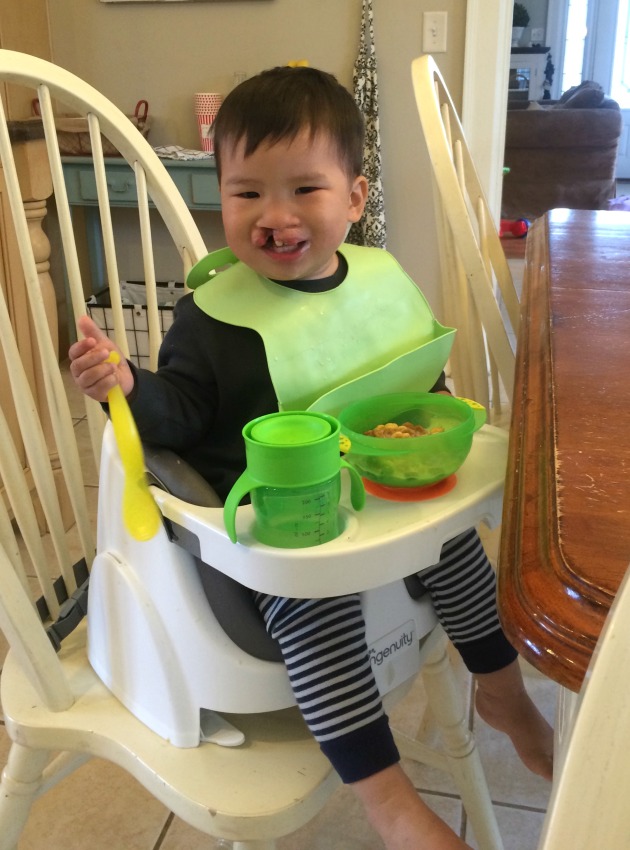 Sleeping has been a bit of an issue. He has a hard time falling asleep most nights. We stay with him and hold his hand or rub his back until he falls asleep, and it can take as long as an hour and a half. It takes a lot of patience, but it can also be a bonding time with him. When he finally falls asleep, he usually stays sleeping until morning.

He takes a nap in the afternoon and it can take a while for him to fall asleep for that as well. He generally doesn’t seem scared about sleeping – he usually seems like he just doesn’t want to miss out on anything and wants to keep playing. 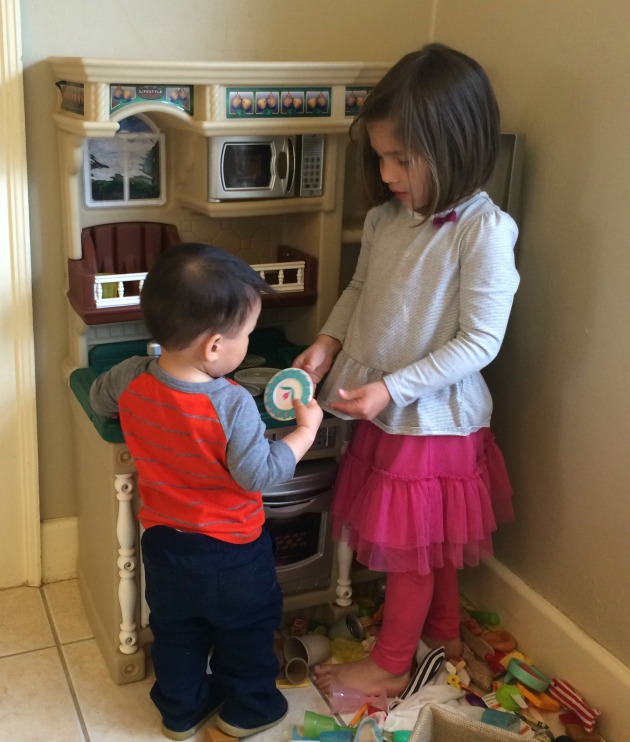 He is such a joy and has an awesome, fun personality that we see coming out more and more every day! He loves to make funny faces and make us laugh. He is still getting to know us, so it feels at times like he is a bit reserved, but I think as time goes on, he will become more comfortable.

He is very attached to me and hubs, which is a very good thing. He is wary of strangers and new people and likes to stay close by when a new person stops by. That also means that he is typically very clingy and likes to be held most of the time. It can be very tiring, but I am so thankful that he is bonding well with us.

He has bonded very well with Avery since she went to China with us, and Jack does a great job playing with him. Violet is having a more difficult time warming up to him. She was the youngest and now a lot of the attention is going to Sawyer, so she naturally is having a harder time with the change. But I am confident that with time she will grow to love him too.

We have decided to keep him mostly home and with us for at least six weeks (called cacooning and you can read more about it here). We won’t be taking him out in public, church, stores, other people’s houses, etc. for that time. The idea is to really work on the bond between him and us, and we want all of his needs to be met by us, so that he learns to trust us as his parents.

He has been taken from the only home he’s known at the orphanage and has dealt with so much change since we’ve gotten him. Although he seems very happy and comfortable with us, we still know that his world has been turned upside down, so we want to do our best to ease his transition into our world. We want to soak up our time with him, playing with him, showing him how much we love him and that we will take care of him.

Thank you for all your encouraging words and comments from my previous posts! I appreciate each and every one of them so much.

18 thoughts on “A little about our youngest”